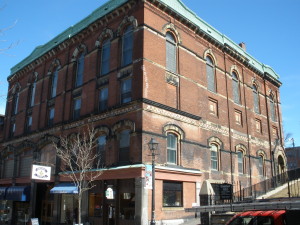 A BRIEF HISTORY OF THE SAINT JOHN MASONIC TEMPLE

From the time that the Grand Lodge of New Brunswick was formed in 1867 the objective of erecting a Masonic edifice in the City of Saint John remained in the forefront. In 1869 a committee consisting of Robert Marshall and James McNichol Jr. were appointed to identify a suitable location to erect the new building.

The first location identified was the property belonging to the grammar school located at the corner of Horsfield and Germain Streets. Unable to reach a suitable agreement, negotiations were commenced with Mr. James Thomas to purchase property on Germain Street belonging to Mr. E. A. Wiggins at a cost of $8,000.00. As negotiations progressed it was discovered that the dimensions of the property that had been represented were incorrect and negotiations ceased. Finally in January of 1872 successful negotiations were completed to purchase two properties adjacent to Trinity Church at a cost of $18,000.00. The properties, which had an aggregate measurement of 100 feet by 200 feet, had belonged to the late Benjamin Smith.

The properties in question had originally been granted to Loyalists James Horsfield and Thomas Lester.

As the Board of General Purposes was simply acting on behalf of the fraternity, the property thus purchased was transferred to a company that had been incorporated by an act of legislature in which the Grand Lodge of New Brunswick and the city lodges were shareholders. The company was known as the New Brunswick Masonic Hall Company with John V. Ellis as President. The capital stock of the company was $100,000.00 divided into 5000 shares at a value of $20.00 each.

When the property was purchased nearly the whole area of the two lots was covered by a collection of wooden structures. The rentals from these properties paid the interest on the mortgage of $13,500.00 and helped to provide a sinking fund to meet the principal and other expenses.

Over the next several years efforts were made to pay down the mortgage and to build a fund that would be used to cover the cost of the erection of a building. This was to be achieved by the further sale of shares in the Masonic Hall Company and from the surplus revenues from the rental properties.

While these efforts were proceeding with satisfactory dispatch the great conflagration of June 20, 1877 would bring the Masonic fraternity in Saint John face to face with the harsh reality of once again being homeless. Of the many structures that were devoured by the fire one was Judge Ritchie’s building on Princess Street, which had been home to the Masonic fraternity for over twenty years. With the need for a new facility being of the utmost urgency George Ernest Fairweather, a member of Albion Lodge No. 1 and John T. McKean of St. John’s Lodge No. 2 were engaged as architects to draw up the plans for the new edifice.  Alexander Christie and John Ferguson, both of the Union Lodge of Portland No. 10 were hired as the principal contractors.

By the summer of 1878 the work had sufficiently advanced that the directors were in a position to call upon the Grand Master to lay the corner stone on July 1st of that year. In accordance with the request, a special communication of Grand Lodge was convened at half-past two and after a short session, a procession was organized as follows:

The various bodies were marshaled in order of procession on Queen Square, thence moved through the several streets to the site of the building where the ceremony of laying the corner stone was conducted by Most Worshipful Brother Clinch assisted by Grand Lodge officers.

With the corner stone laid work progressed steadily on the building so that by May 1, 1879 the various Masonic bodies were able to take possession of the building and occupy the temporary quarters. They continued to occupy these temporary quarters up until April 22, 1884 when the main meeting room had been completed and furnished for the use of Grand Lodge and the subordinate city lodges. Subsequently other apartments were finished and fitted up to meet the needs of the other Masonic bodies.

To meet the heavy outlay of funds 2042 shares had been subscribed to by various Masonic bodies, as well as individual members, throughout the province, raising $40,840.00. In addition two popular and successful bazaars were held in the building. The first was held from the 15th to the 25th of September 1879, which realized the sum of $5,908.00. The second was held between July 1st and 10th 1884 netting another $4,278.00. The balance of the outlay was provided for by a mortgage against the property and building.

On January 26, 1929 fire would once again haunt the Masonic fraternity in Saint John when the Masonic Temple was all but destroyed. The Evening Time Globe of January 26th carried an extensive story on the fire and from the opening paragraphs we find the following “Nothing left but the brick skeleton and inside it a smouldering inferno of timbers on which firemen were still directing numerous hose streams this afternoon, is left of the New Brunswick Grand Masonic Lodge’s building in Germain Street. Over thirty firemen fought the blaze, which, with the lights in the south end of the city turned off, could be seen as far as Loch Lomond. Four pumpers, two chemical, two steam as well as ladder wagons were used to fight the fire.”

With the destruction of the Masonic Temple the Board of General Purposes was faced with a decision as to what course of action they would take. To this end an emergency meeting of Grand Lodge was held on March 21st, 1929 wherein a resolution was passed that the Masonic Grand Lodge Corporation undertake to transfer to any Masonic body or Masonic Corporation in Saint John the premises on Germain Street, provided that body or Corporation undertake to erect a proper Masonic Temple in the said City of Saint John. With the challenge before them the five city lodges, namely Albion No. 1, St. Johns No. 2, Hibernia No. 3, Union Lodge of Portland No. 10 and The New Brunswick Lodge No. 22 banded together to form the Masonic Temple Ltd and assume ownership of the property and building on Germain Street.

By the end of May 1929 Garnett W. Wilson had been engaged as architect and plans prepared along with estimates of the cost of restoration. The plans called for a four-story building at a cost of $113,000.00. Based on the plans and estimates the newly formed Masonic Temple Ltd proceeded with the task of restoring the building and by November 26th, 1930 the restoration had sufficiently advanced that the Masonic bodies were once again able to occupy their quarters.

Today the Masonic Temple Ltd. continues as the owner of this historic building and while the stewardship is not an easy task, the Directors continue to exercise their duties with diligence and dedication.